You might think that the marker is just a slightly better version of the paintball gun. But not! There are many things to exploit in this SP Shocker RSX gun. Its exciting features will help you quite a lot in the field.

Let’s dig it out with Discovery UK!

At first glance, we see that the SP Shocker RSX has many similarities with the markers in the regular SP line. However, there are many beautiful things hidden behind that simple appearance.

Please note that the gun is light but not poor. Its weight is only less than 2 pounds. Thus, it eases the burden of paintball players when running the campaign.

If you want something heavier, then this paintball gun is not for you. Its neat and well-balanced body makes it feel excellent in hand. The excellence of this model makes it not too loud.

The SP Shocker RSX paintball marker produces indescribably smooth shots. If you often encounter blockages or are stuck in the barrel of a gun, this maker has completely solved that problem.

Why does it have such a smooth performance?

The electronic pneumatic solenoid has taken this gun to a whole new level compared to its rivals and its predecessor.

This RSX solenoid is adjustable. It depends on whether you want to shoot fast or shoot slow. If so, then you just need to adjust a bit to suit your needs and gout.

When you make one shot, it will emit a different sound characteristic. People can even tell which marker you’re using just by the sound. The RSX solenoid is also one of the reasons why this marker is quieter than its predecessor.

This SP Shocker RSX has all the standards you need for a fiery field. It possesses many features of a medium and high-end paintball gun.

You might be happy in the level feed neck, powerful barrel, or OLED screen. They’ve been specials before, but SP has put them all together in this versatile paintball marker.

Readers can find a more general overview via this video.

The SP Shocker RSX is a fun and brilliant paintball gun. Here are some of its pros and cons that you can refer to.

We would like to give you three equally great suggestions if the SP Shocker RSX isn’t available in your area. 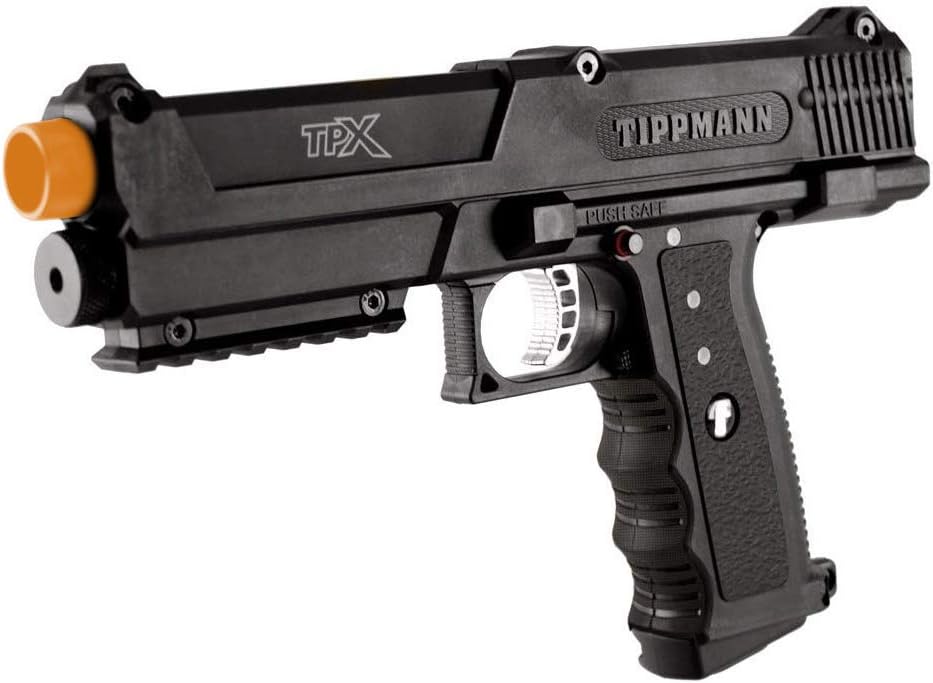 The Tippmann TiPX Mag Fed is a popular, affordable paintball gun. You will notice that it has a pretty long and straight range.

You can use a CO2 tank to recharge the gun. The cost of Co2 is also cheap. Thus, you will be very economical when using this paintball gun.

This paintball marker is good beyond expectations and beyond what you pay. You can often go on a campaign with it, and it won’t break a single one of your paintballs. It is reliable and also easy to use while the price is not too high either.

This Empire Ax 2.0 gun will be your trusted companion in any field. It has a spectacular performance and the ability to shoot accurately.

Everything is ready out of the box. Paintballers believed that the model is a durable and premium paintball gun. There is only one disadvantage of a high price.

This SP Shocker RSX offers customers two things at the same time: economic and good performance. It’s not something too special in the paintball gun market. However, this kind of marker gives users the best shooting experience in the field.

It is also beginner-friendly. There is no difficulty when you first approach this model. Bolt disassembly took place smoothly.

SP Shocker RSX users commented that the manufacturer was innovative when applying it at a competitive price. This price point makes it stand out from the paintball models available on the market for what it is.

They were “pleased” that a paintball marker with a mid-range price tag possessed the same capabilities as higher-end markers. You can see how great it performs through this video.

We receive inquiries regarding SP Shocker RSX. We hope you can find something here.

What is the barrel size of the SP Shocker RSX?

The barrel measurement is 14 inches in length.

What is the weight of the SP Shocker RSX?

It is one of the lightest paintball markers available on the market. Its weight is about 1.7 to 2.0 pounds.

Does temperature affect this marker?

No. According to the general evaluation of users, they can freely play with this gun in cold weather. Performance is like under typical weather.

All in all, the best paintball guns from SP are worth buying among what is available in the market. Anyone who knows about paintball will not be able to ignore the name “shocker.”

The SP Shocker RSX paintball gun gives paintballers outstanding shooting performance. It operates smoothly regardless of cold weather. It’s light, durable, and well worth the money. Weight is also a bright spot that hardly any paintball gun can match.

This SP gun is suitable for most players, including beginners. Simplify your campaigns with the SP Shocker RSX today!

A real Florida guy, Miller Cathal is a strategist on Nicholas Rabackoff's team. Ryan is most commonly known for his incredible paintball IQ and ridiculous skills with a paintball gun. Now, he is the author of our articles.